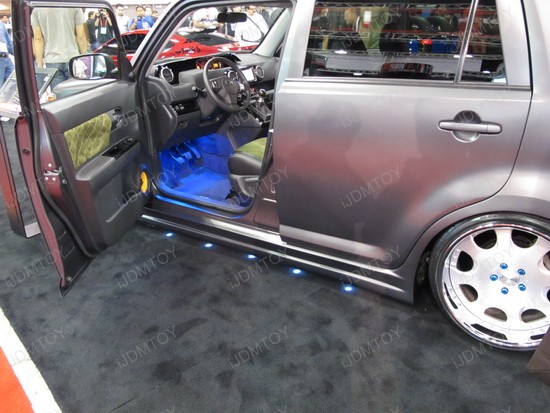 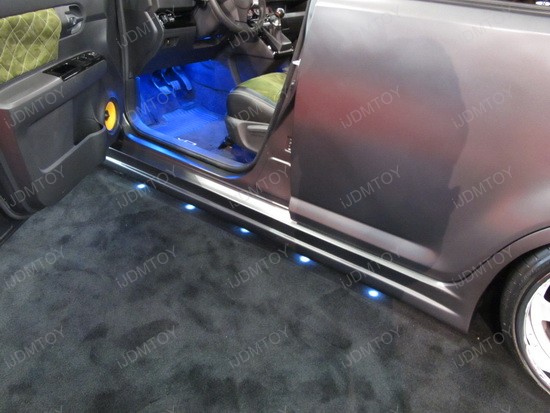 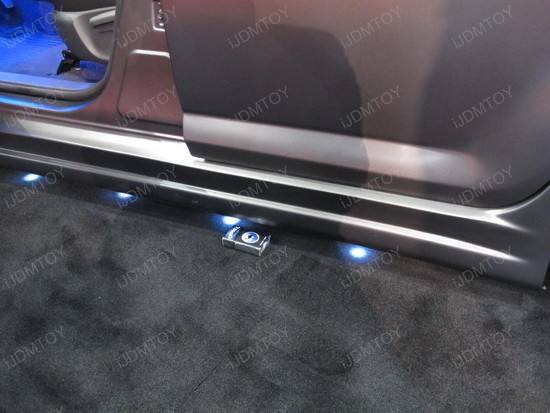 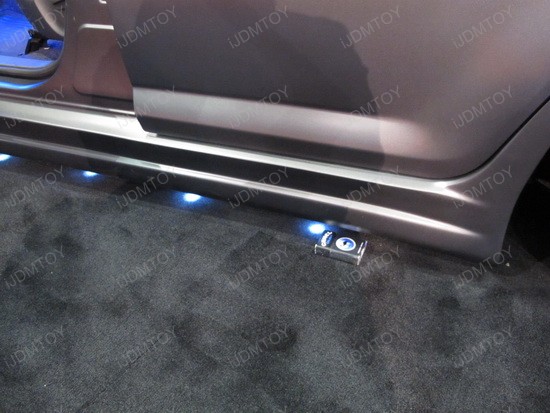 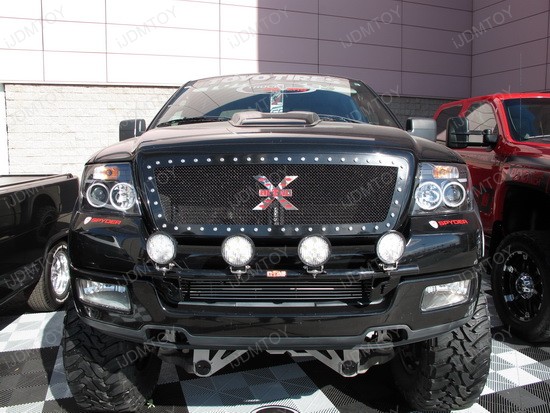 When I went out to take a breath of fresh air, I stumbled upon the featured hardcore modded black Ford F-150. The overall brute force appearance is supplemented by four LED off-road lamps along with the higher suspension, the projector headlights and the studded X-METAL series main grille. The big off-road Toyo tires and modified bumper made a certain impression, too. What more can I say – with a look like that you have to agree this vehicle is a real heavy duty off-road machine. 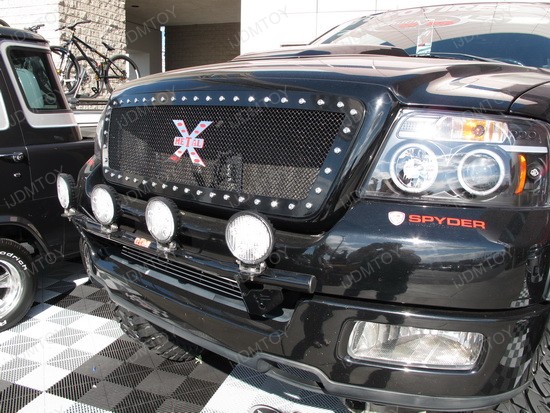 "These are bright like Hell!" said one of the nearby truck fans, when I get closer to the LED work light. After a small talk with that guy I learned how can I get the same high power super bright LED off-road lamps. JDM Toy offers 18W Heavy Duty 12V-24V 6-LED work lamp, providing a bright xenon white light that is much easier to work under, than the conventional light from a halogen bulb. You have to take in mind the fact that you will improve the safety of your night work and fuel efficiency, because the lightning output of this lamp is twice more than the lightning output of a halogen lamp. What’s more – JDM’s quality product is waterproof and has anti-break toughened glass lens. Ain’t it that just awesome? 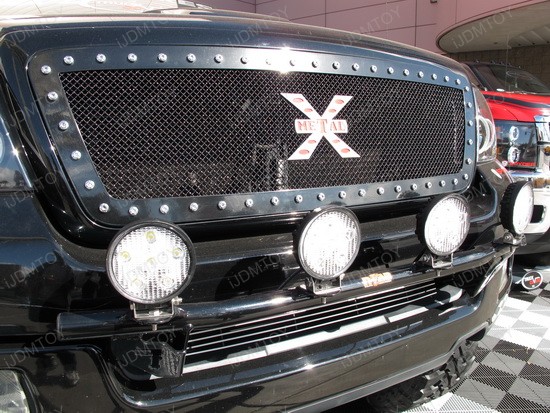 Using LED technology in this Ford F-150 pickup truck is a very good idea – with not two, but four LED work lights, the power efficiency and long life of each unit are crucial factors, which are not to be neglected. Despite the fact that this vehicle is prepared for entertainment purposes, I am sure its LED equipment could be very helpful in any situation – from towing broken cars to off-road extreme thrills at night. 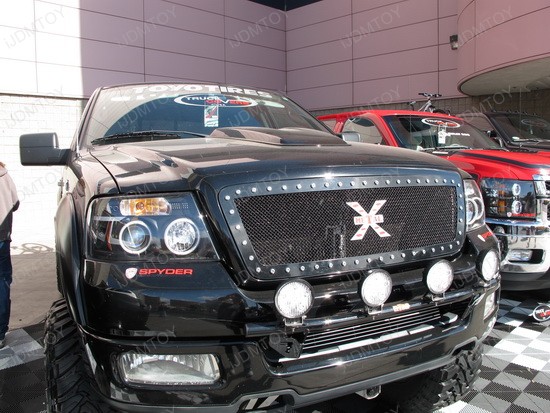 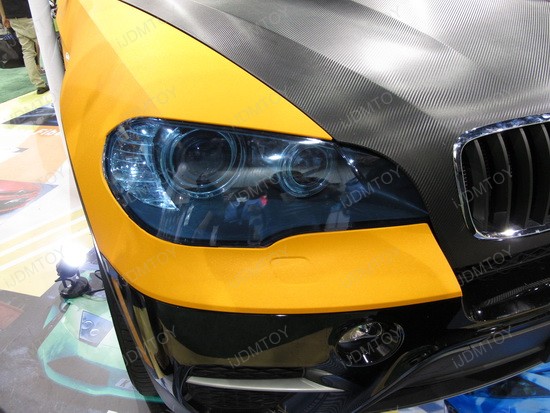 When I saw this 2010 BMW X5 I already knew it was going to be the next car I will write about. Here we have a very nice bimmer with some trendy features – the hood is wrapped in a Carbon Fiber Sheet and a blue tint sheet is applied to the headlights. Sounds cool, huh? But check this out – the whole car body is covered in black vinyl, except for the front doors and front fenders, which are done in golden yellow – a classic Hermes Birkin colors. All these upgrades give the SUV more aggressive and distinctive look, that sounds like "Get out of my way, I am stylish, I am beautiful, I am unique!" 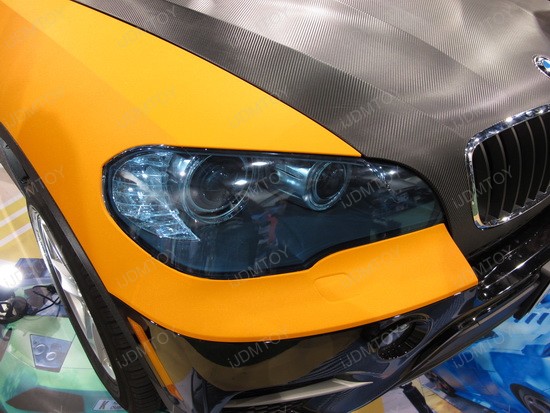 Been attracted by the incredible and eye-touching visual accessories of that 2010 BMW X5, I decided to take a good look at the front hood. It was a surprise to find out the 3D Twill-Weave Carbon fiber sheet is with great quality, which has nothing common with all those cheap printed carbon patterns on the market. The weave reflects light the same way as the actual carbon fiber material does, which is awesome. There was even some guys who argued whether this was a real carbon-made hood or not, because the similarity was great. 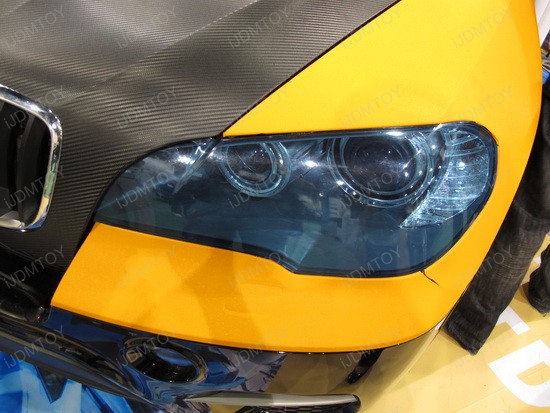 However, I asked around for some high quality vinyl and was told to give a shot at the Carbon Fiber Sheet from JDM Toy. I have to tell you my order was a real deal – their product has the same realistic look as the mentioned above, the sheets are made of UV resistant vinyl that features a carbon fiber textured finish, and are very moldable. I don’t know if the vinyl, used on the hood of the 2010 BMW X5 is a product of JDM Toy, but you just cannot go wrong with purchasing a Carbon Fiber Vinyl from these guys. 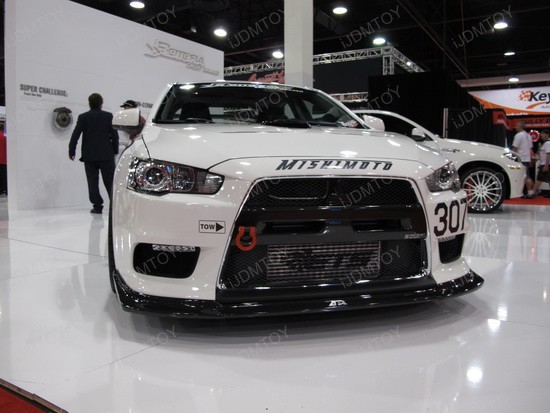 As promised, here comes the other car with LED Daytime Running Lights – the 2011 Mitsubishi Evo X, which was proudly featured at the Super Challenge Booth. I bet this Evo has enormous braking power, but let’s take a closer look at the visual lightning accessories. 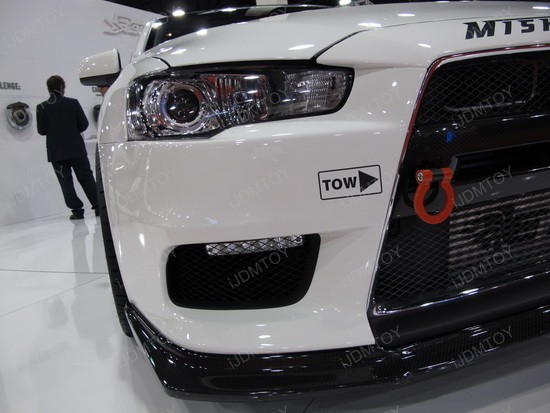 What I see right below the crystal clear HID headlights, is a nice pair of LED Daytime Running Lights. They are mounted behind the grille in the air flow openings of the bumper, which makes these LED DRL look very elegant and discrete at the same time. Actually, this is a pretty smart idea – at first people see the large black front grille, the ETS intercooler in the lower section, and then the stylish LED Daytime Running Lights on both sides. Oh, boy, this is what I call a masterpiece – everything is on the right place – this is a real proof the guys at Super Challenge obviously pay attention to each detail, not just the braking system. 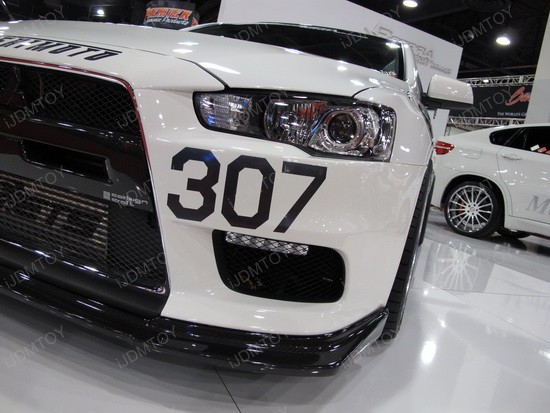 If you a car enthusiast, you will notice these lamps represent the famous and modern Mercedes-Benz Brabus Style DRL. However, if you really like the awesome look of the 5 LED Brabus Style DRL, you can always drop by the JDM Toy store and ask for a high quality LED DRL kit. Their product can be easily mounted for any cars, SUVs or trucks in between the bumper grill, or below bumper, and it comes with wiring harness for easy wiring.

As promised, this featured 2011 Mitsubishi Evo X was the last show car with LED Daytime Running Lights I will write about, but be ready for 3 more LED equipped vehicles from this year’s SEMA Show. 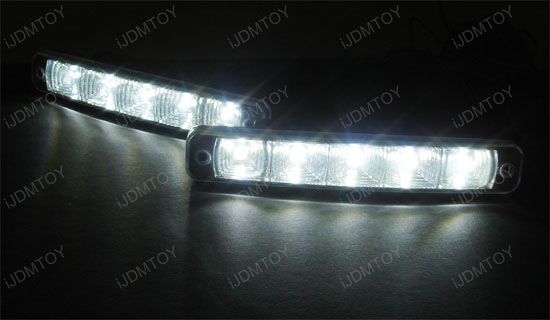 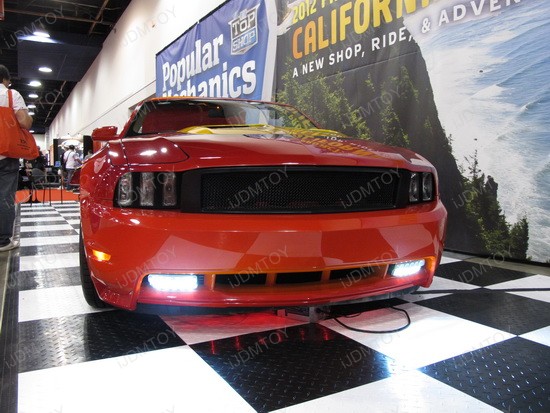 I headed to the Popular Mechanics Booth and was very happy to find a 2011 Ford Mustang with not two, but four LED Daytime Running Lights. Maybe this is the time to tell you that Ford announced the 2013 ‘Stang and LED technology comes within standard package. Actually, it was about time manufacturers to include LED, but ain’t it great that Popular Mechanics really did something impressive, thinking ahead of time – they took two pairs of Brabus Style 5-LED lamps and turned them into a pair of 10-LED lamps on each side. 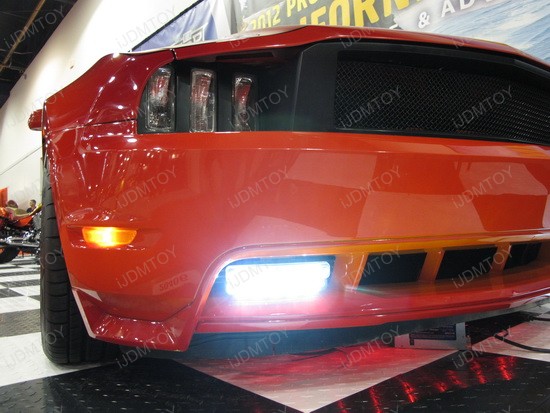 The result is obvious – the car looks definitely more stylish, lower and wider. Installing the LED Daytime Running Lights in set of two seems to be the right thing to do, just because the openings in the front bumper are bigger for better airflow and thinner DRL lamps just won’t look good. And what’s more, these bad boys could be used as fog lights – the amount of light they produce is enormously bright, which makes them perfect for places with reduced visibility. 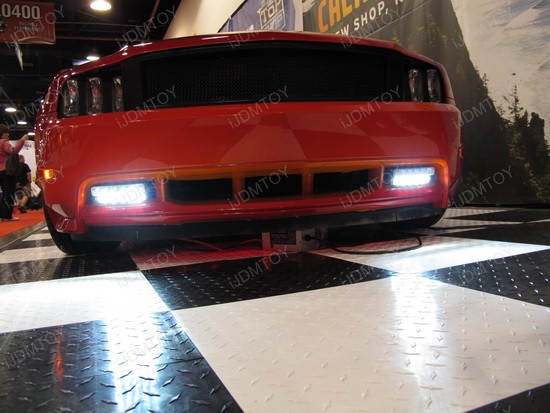 As it turned out, this LED automotive lightning accessory is very popular in this year’s SEMA show cars. I saw it installed on that Fiat 500 at the Chrysler FIAT Booth, and on one more car, that will be unveiled in another report, so stay tuned. In meantime, take a look at JDM Toys online store and search for Xenon White Euro Mercedes Brabus Style 5-Light LED DRL Kit. This kit includes a set of two 5-LED lamps, which look just like the Mercedes-Benz Brabus Style DRL and can be easily mounted for any cars, SUVs or trucks in between the bumper grill, or below the bumper. The last time I checked, there was a huge discount, so hurry up! 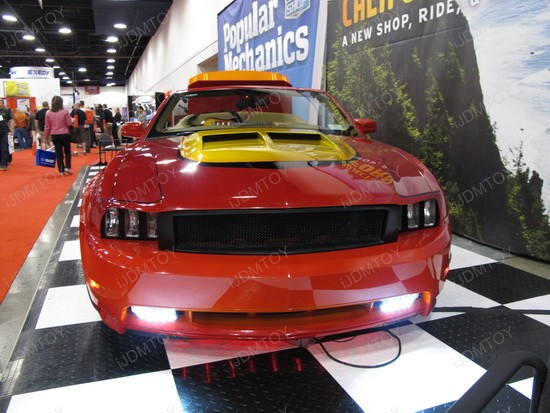 The iconic 2011 Ford Mustang is a real proof for a symbiosis between classic muscle car and new age modern technology. And while waiting for the next SEMA 2011 fancy lightning accessories reports, you can take a good look at the featured LED Daytime Running Lights and consider giving your car a new sleek LED look.