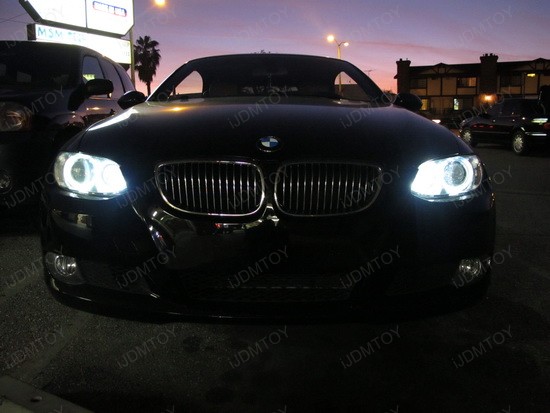 2008 BMW 335i Coupe is said to be the ultimate driving machine, but when the owner added the LED BMW Angel Eyes, this ride turned out to be the ultimate driving machine with a perfect blend of style, appearance and performance. Just look at the beautiful front end, the bright light, coming from the HID headlights and the perfectly matching xenon white E92 LED Angel Eyes. Then look at yourself and see the smile on your face this car puts on. 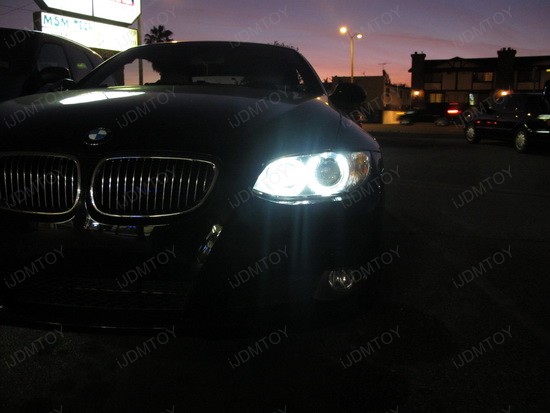 Well, this is what I am talking about – the BMW Angel Eyes will get rid of the dull yellow look for a nice xenon white HID matching look similar to the all new 2011 BMW E92 3 Series and 2011 BMW 5 Series. The secret of the super bright rings is hidden in the revolutionary new design of the iJDMTOY’s 60-degree Wide Angle High Power H8 LED ring marker bulbs. Basically, what you get is a maximum lighting output to light up the BMW Angel Eyes much brighter! And guess what – each bulb is enough to power up two rings on each side. 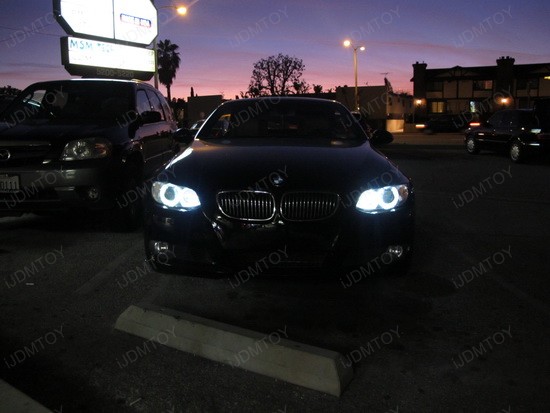 Fully deserving of its popularity, the BMW E92 3 Series sets the bar for many aspects, but true fans always look for available improvements and certain level of customization. This is where the new BMW Angel Eyes come in. I guess you wonder how to install this awesome LED product, but don’t worry – it is as easy as a pie. First make sure the engine is turned off and key is off, too. Then proceed and locate the angel eye ring bulb cap, open it and remove the stock H8 halogen bulbs. Take the clamp, included in the package and use it to fold the 60 degrees wide angle H8 LED bulb and install it back to the H8 housing. Next, connect the Wide Angle H8 Angel Eye Bulb to the Error Free Decoder and plug the decoder back to the stock harness. Finally, make sure the LED bulb is directly facing the Angel Eye Ring Tube Opening for maxima lighting performance. 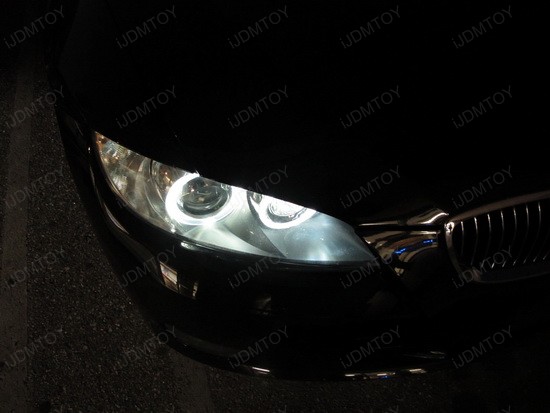 Please note that these awesome BMW Angel Eyes will fit in other BMW models without modifications, too. Some of them are E90 Sedan 2009 and up, E92 Coupe 2008 and up, E90 M3 2009 and up, E92 M3 2008 and up, E93 Convertible 2008 and up. What’s more, make sure the BMW has factory equipped HID headlights, otherwise this kit won’t fit in. However, more models are compatible with this LED set, but for full list, check out the iJDMTOY online shop and look for this fantastic LED upgrade.

Anyway, apart from being the most fantastic car, the 2008 BMW 335i Coupe looks much better with the LED BMW Angel Eyes and very similar to the new 2011 and up BMW’s stock high power LED Angel Eyes rings. People who own such amazing car say it is worth every penny and is the nicest and best car they have ever owned, but when they installed the completely error free plug and play E92 LED Angel Eyes, it truly became the ultimate driving machine! 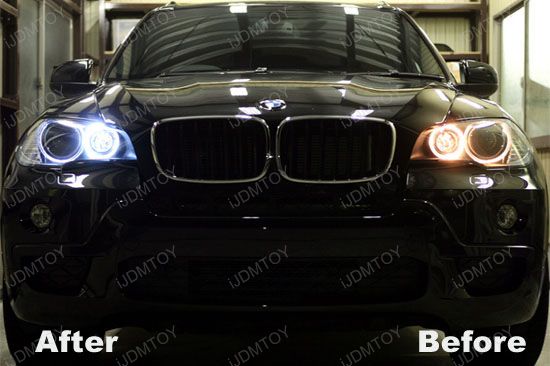 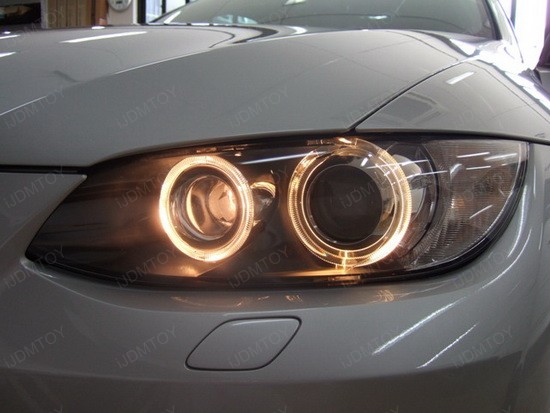 This project involves upgrading the stock BMW Angel Eyes of a 2010 BMW 328i to LED ones. We were very pleased with the result, and so was the owner of this beautiful Bimmer. The first thing any driver will notice is the unique blue color. As you see, there is a huge difference between old yellowish BMW Angel Eyes and LED BMW Angel Eyes, as the LED gives this E92 a classy and a sleek appearance. 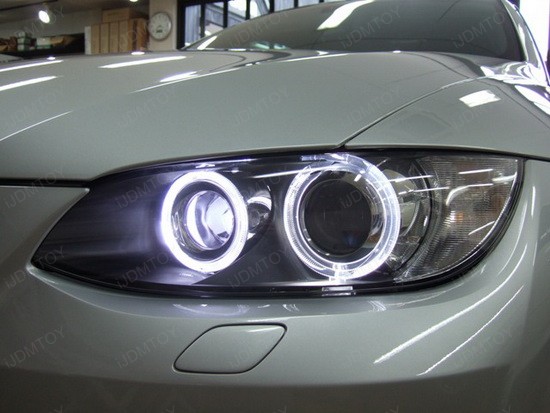 Installing this product is as simple as putting the biscuit in the basket? It’s a plug and play. But you should have in mind that for the High Power LED BMW Angel Eyes to fit, the BMW must have factory equipped HID Headlights. It sure fits in 2010 BMW 328i, as well as all E92 above 2008, but for a complete compatibility list, please check out the product description on our website.

One of the coolest things is that these specific BMW Angel Eyes are completely error-free. Thanks to the special designed Error Free Decoders, there will be no more dashboard errors and no blinking issue with this high end profile product. It’s nothing more than a perfect upgrade for this 2010 BMW 328i.

Let’s reveal some of the secrets of the LED BMW 328i Angel Eyes. The wider 60 degrees arms make the high power LED bulbs much closer to the angel eye opening, so it looks much brighter than the stock BMW 328i Angel Eye rings, and consumes less energy. The cooler tone adds a sleek and modern appearance and in addition to the brighter output, the cool color becomes even more noticeable. So, it sure sounds like a total win, and if you want to improve your BMW, this is your chance. BMW LED Angel Eyes is nothing less than a good deal any driver can invest upon, as better lighting means safety on the road. And when we saw them at night, well? They were hell of a nice touch to this 2010 BMW 328i!

Brought to you by iJDMTOY.com, the expert for your Car LED Lights. Follow us on Facebook for exclusive promo codes. 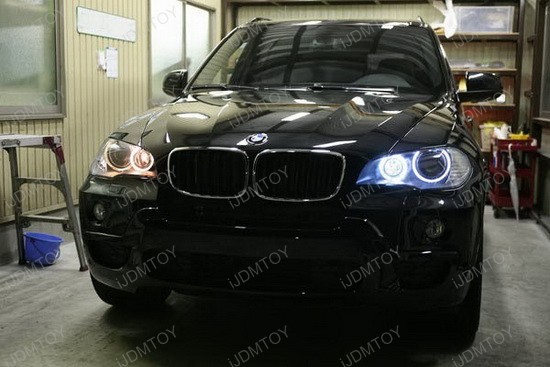 My friend sent me pictures of his X5 after installing our BMW Angel Eyes. I guess he got too lazy and stopped half way. Just kidding. The difference of the two Angel Eyes is quite dramatic. The pure Xenon White color stands out brightly.

Lights, camera, action! That’s what your BMW will say the moment you turn on the engine. BMW Angel Eyes are a nice touch up for the X5. LED Angel Eyes sport a classy and a sleek appearance all together. Okay so we get that the color is unique, but what else is so unique about these BMW X5 Angel Eyes? 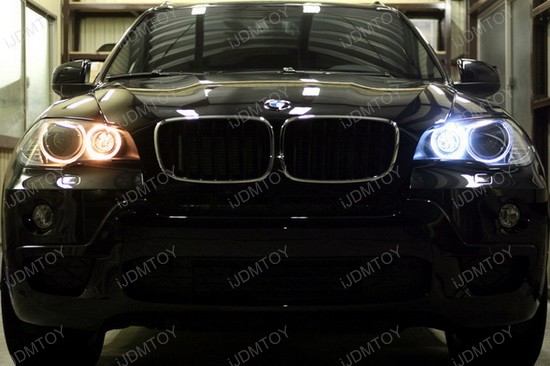 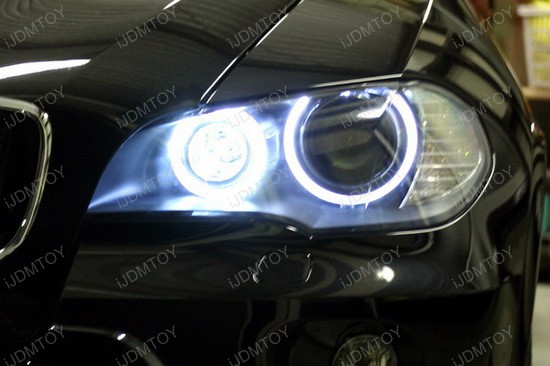 As some of you may know, LED consumes less energy from your car battery and it can last longer than regular bulbs. In most cases, LED Angel Eyes will last as long as your car! Brighter and energy efficient, that’s a pretty good deal. Of course owning a pair of Angel Eyes isn’t exactly free, but it’s one of the best investments for a BMW.

If you want to improve your BMW, upgrading your Angel Eyes is an effortless and reliable method. Other investments such as a new paint job or upgrading the seats can cost a bundle. In this economy everyone is looking for the best deals. BMW X5 Angel Eyes is just another good deal any driver can invest upon. If you’re looking for a new change yet money is tight or you just want to save a couple bucks, then consider the LED BMW X5 Angel Eyes. 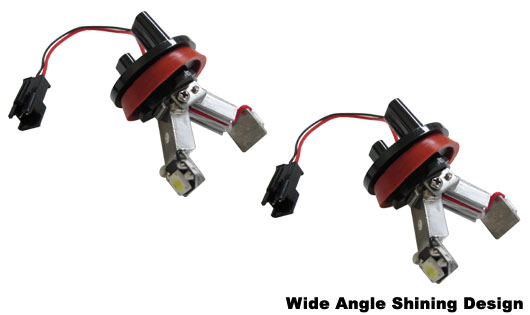 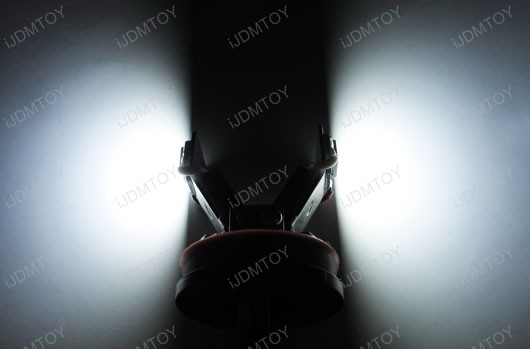 Brought to you by www.iJDMTOY.com, the one and only one automotive accessories store for all your Car LED Lights. Follow us on Facebook for special discount and product upgrade information.

Ever wonder what the world looks like through a pair of an angel’s eyes? Well we don’t know, but we do know what it will look like through BMW Angel Eyes. After installing it for our customer’s 2008 BMW E92 335i, he was kind enough to lend it for some snapshots. These BMW Angel Eyes aren’t your typical halogen headlights that come with your BMW. These are powered by LED. But what makes LED so special? 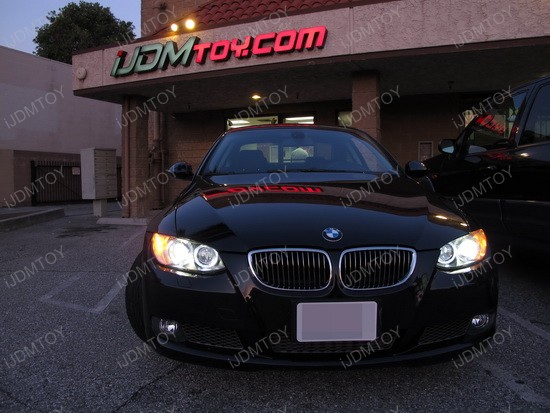 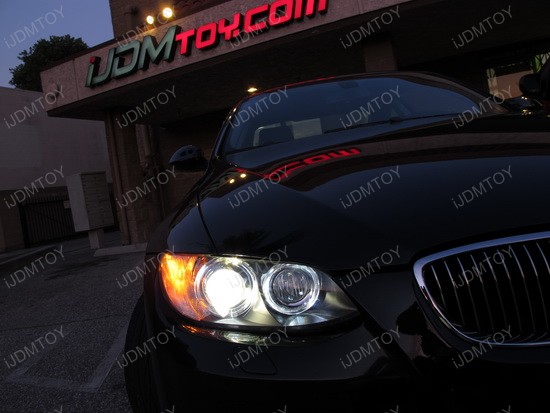 Well for starters, LED Angel Eyes look are brighter and have different colors than halogen headlights. Compare the BMW’s Angel Eyes to the lights on top of our iJDMTOY.com sign. LED Angel Eyes offer a Xenon White color. The cooler tone adds a sleek and modern appearance. With brighter output, the cool color becomes even more noticeable.

Is brighter is better? BMW Angel Eyes can be so useful on the road at night. With the help of LED Angel Eyes you might be able to avoid those darn possums or cats running into the streets at night. Because who wants to clean up guts off their tires and bumper? 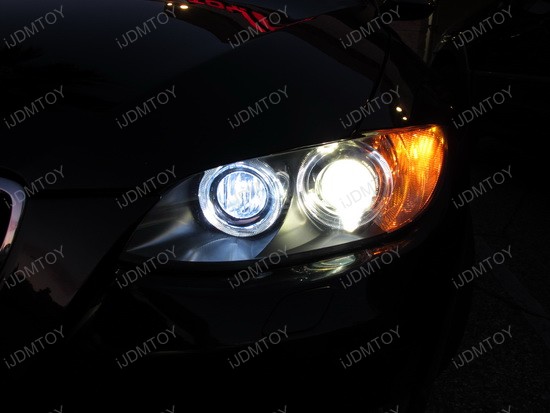 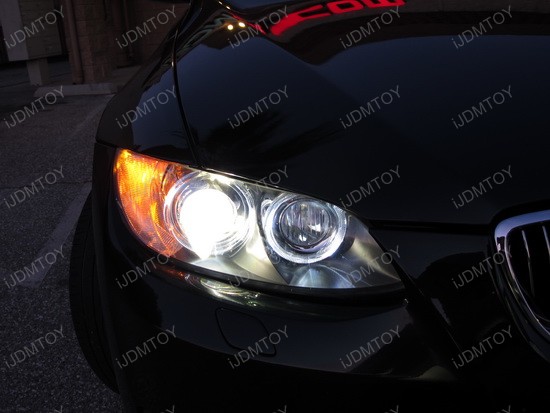 Okay so LED Angel Eyes are brighter. What else makes it so special? Well they also consume less energy. It sure sounds like a win both ways; brighter and more energy efficient. BMW Angel Eyes will most likely last till your BMW expires. I don’t see any disadvantages of owning LED Angel Eyes. I suppose owning a pair isn’t exactly free, but it’s definitely a smart upgrade you can make for your BMW.

A BMW installed with a pair of BMW Angel Eyes is like a flower bed grown with flower feed. The difference is truly dramatic and rewarding. If you desire a change in appearance then give BMW Angel Eyes a try.