This custom Infiniti G37 Coupe features a very nice addon- Bumper LED DRL. The famous Audi style 9 LED DRL perfectly fits in the lower bumper area of this car and makes it even more appealing and sporty. I guess most of you will love the new sleek LED look of this Infiniti G and will agree that Bumper LED daytime lights are great add-on to the overall luxury and aggressive look. 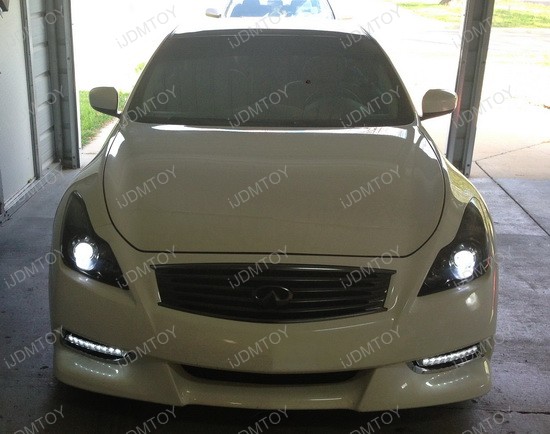 Each lamp has 9 bulbs, that are obviously enough to make the car noticeable from greater distance. Very bright during the day and even brighter at night time, these powerful lamps shine in Xenon White light that perfectly matches with 6000K HID headlights. And this Infiniti G37 is the proof how great this Audi style kit fits in. What’s more, the very same high quality product from iJDMTOY is an universal fit and can be installed on many other cars, too. 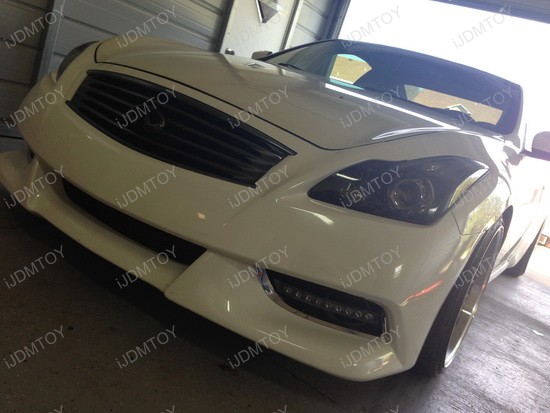 Installing this super cool product is very easy. Take off the lower bumper grille, peel the double-sided tape and align the lamp in place. Then use the included screws to fix it. Do the same with the other side grille and then tap the positive (+) and negative (-) to the parking light (+ / – ) wire. Test, enjoy and showcase your new Bumper LED DRL addon with a drive down the street. 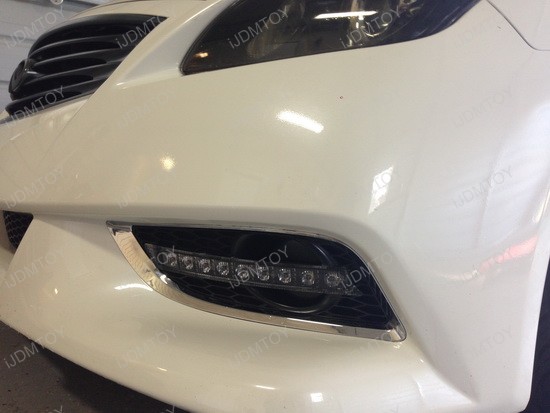 The appearance of this eye-catching Infiniti G37 Coupe with bumper LED DRL installed is amazing – wrapped in a well-tailored suit of sleekness, this ride is a real head-turner. Think about how such small addon takes the sporty coupe to the next level and increases the vehicle’s visibility to oncoming traffic during the day. Add the awesome Euro look and you just got the formula of awesomeness. 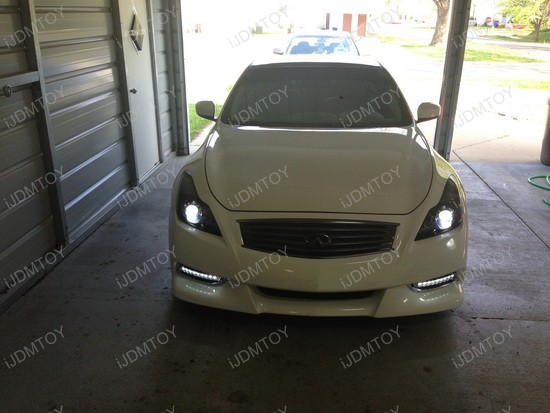 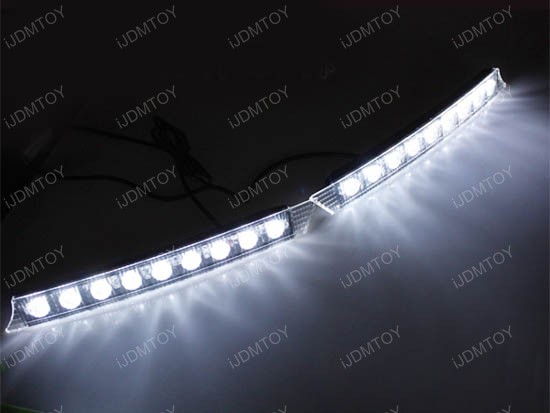 Today’s featured ride is this 2011 Infiniti G37 Sedan with very nice addon – LED DRL. It is well-known, that Infiniti’s G Sedan was the first Japanese luxury car that could truly compete with the best European compact and mid-size luxury performance sedans. And with these LED Driving Lamps the G37’s combination of performance, luxury and price give it a leg up on models such as the Audi A4 and BMW 3-Series. 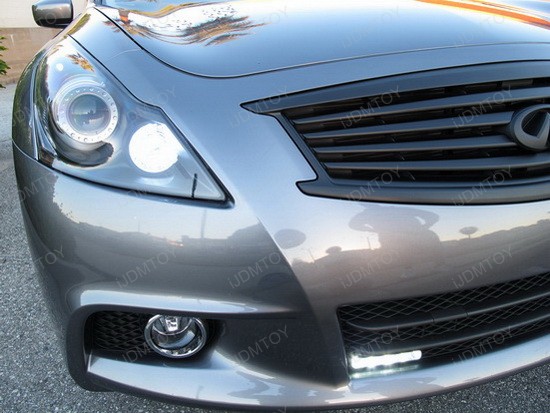 It is true that the 2011 Infiniti G37 Sedan is wrapped in a well-tailored suit of sleekness to avoid looking over-styled, but such LED DRL addon looks just in place in between the Infiniti’s distinctive lower grille. Ain’t this a perfect spice up to the set of large L-shaped headlamps and lower fog lights? I guess you’ll be very excited if I tell you that the same awesome LED DRL from iJDMTOY is an universal fit kit with advanced automatic on/off switch. 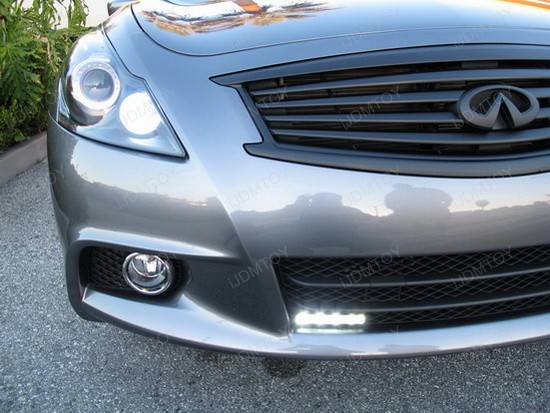 The LED-Day-Light Style 5-LED High Power kit increase vehicle’s visibility for safer driving. These lights are compliant with existing DRL regulations and add a stylish look of high performance to any vehicle. What’s more, the automatic DRL On/Off switch turns on the LED lights automatically at the start of the engine and turns them off when engine is off. Pretty cool, huh? And the best part is that you can install the ultra-slim LED DRL in a few minutes with no modifications needed. Simply connect this advanced automatic on/off switch directly to battery’s positive and negative and that’s it – enjoy the Xenon White Philips Style look of your ride. 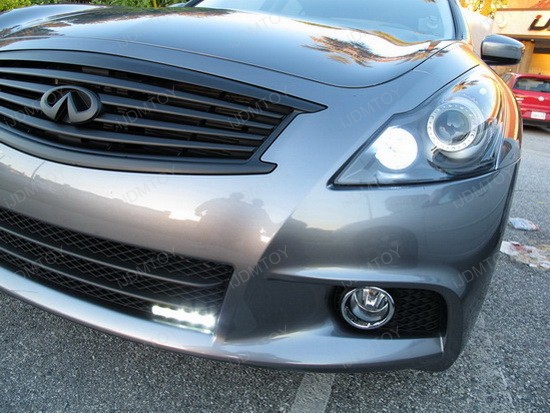 The owner of this 2011 Infinity G37 Sedan is very happy with the LED DRL addon and if you think about how such small improvement takes the elegant and sleek sedan to the next level, then you might consider purchasing LED Driving Lamps from iJDMTOY, too. I bet you’ll be quite satisfied with the look and the light output – it is truly amazing. Despite the fact these lights are very bright and very noticeable day or night, you shouldn’t use them only when driving at night time. 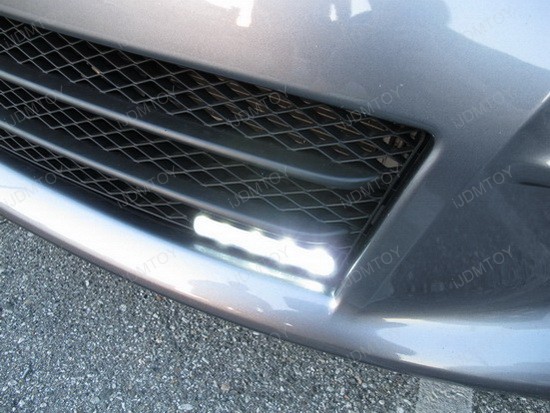 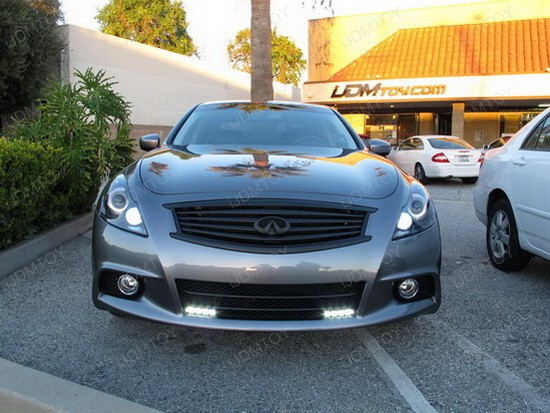 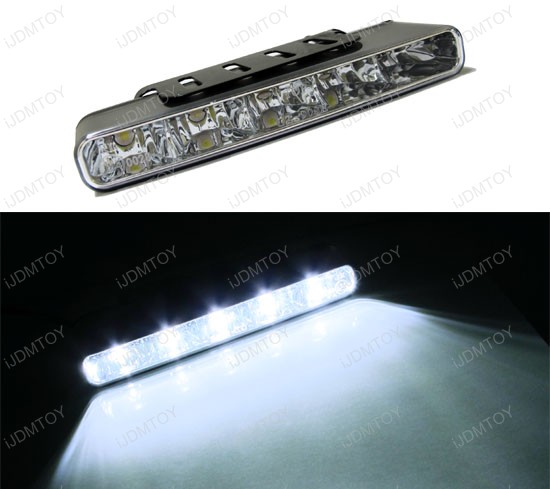